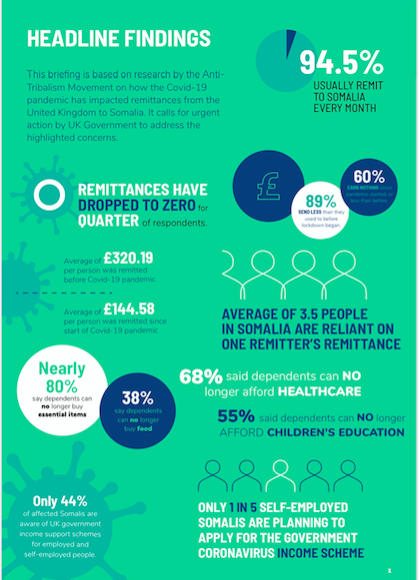 Somalia is on the edge of a “desperate humanitarian crisis” as the level of remittance collapses, a new report reveals today.

This new report has shown Somalia is facing a multitude of challenges as Covid-19 spreads in Africa and continues to ravage the UK, causing rising unemployment in the Somali community and a collapse in the money they are sending back home.

The report published today by the Anti-Tribalism Movement has shown a light on growing concerns that Somalia is about to enter a desperate humanitarian crisis.

The survey found 89% per cent of Somalis living in the UK are sending home less than they used to before lockdown began. It also found the vast majority of those who depend on the money being shipped to Somalia are no longer able to afford basic essentials such as food and healthcare.

The collapse in remittance is also putting significant emotional strain on those who are increasingly desperate to send money home. One participant stated:

“The inability to send remittances has caused me great stress and anxiety as I cannot support my dependent families who their only means of getting money to put food on the table is the money I sent to them and there is no system that can support them.”

The Anti-Tribalism Movement has set out a series of recommendations to help support the transfer of funds from the UK to Somalia. They have called on the UK Government to work closer with banks to support money transfer service companies through the crisis and for the Department for International Development to increase short-term aid to alleviate the pressures on one of the world’s poorest countries.

“Somalia is edging ever closer to a desperate humanitarian crisis. As Covid-19 gets a foothold in Africa, the money many families rely on through remittance is disappearing. This perfect storm is happening now and action is needed now.

“And the Government needs to play its part, releasing aid to alleviate some of the pain and supporting legitimate firms to access banking services.

“I fully appreciate the UK is facing its own challenges. But as a rich nation, with a proud track record of supporting Africa, now its the time to strengthen the enormous UK political capital invested in Somalia.”