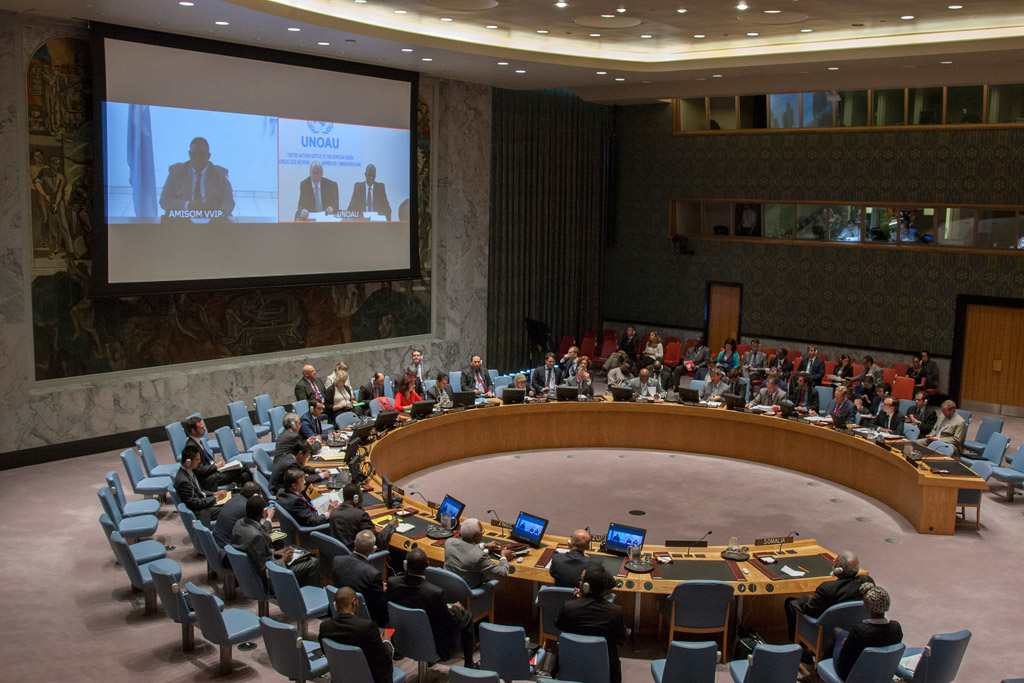 19 May 2015 – While it is too soon to celebrate definitive success in Somalia, and while the situation remains challenging, progress is being made and the international community would be missing a strategic opportunity if it failed to realize how much is being achieved, the top United Nations in the country told the Security Council today.

“When I spoke to you in February, I was both excited and worried about the year ahead. The last few months have highlighted the progress and the challenges,” said Nicholas Kay, Special Representative of the Secretary-General for Somalia and head of the UN Assistance Mission in Somalia (UNSOM) as briefed Council members this morning.

“The world should not squander this opportunity. We need to reinforce success with increased engagement and resources in the coming months.”

Mr. Kay said momentum had been regained on efforts to achieve political progress, pointing to work by federal, regional and local leaders, parliamentarians, and people from all walks of life to build a State through dialogue and reconciliation, and top-level commitment to deliver Somalia’s Vision 2016 plan, as well as commitment to several other important targets the Government set.

“The prevailing environment of mistrust accumulated over 25 years makes the task difficult and painstaking,” he said. “But it must continue, and deserves our sustained support.”

He expressed concerns about a lack of progress on the constitutional review process and about the timetable for elections in Somaliland, which were due next month, while the National Independent Electoral Commission would work in a compressed timeline to discharge its duties, albeit with the support and advice of the UN.

The UN would also work with the African Union (AU), the Intergovernmental Authority for Development (IGAD) and European Union member States on forming Interim Regional Administrations that ensure inclusivity for women, minorities and youth. The mandate of UNSOM remained highly relevant and it would evolve as progress on federalism proceeded, with, for example, work in the country’s regions becoming increasingly important.

On the economic front, Mr. Kay said he was encouraged by work to support implementation of the New Deal Somali Compact, including approval of seven projects worth $100 million within the UN Multi-Partner Trust Fund. However, only 10 per cent of funds pledged through the Compact architecture were committed and Somalia’s financial system remained high risk. Nonetheless, steps were being taken within the New Deal framework to ensure robust oversight of overall governance.

“There is still a long way to go,” he said, “but I am pleased to report that a Treasury Single Account is now in place, creating a single channel for national revenues and payments.”

He drew attention to an “alarming” humanitarian situation, stressing the need for “constant attention” to the issue in the form of adequate funding as well as continuous upgrades to our analytical and forecasting capabilities and systems.

“One third into the year, the Humanitarian Appeal is only 12 per cent funded, having received only $100 million of the $863 million needed.” He said. “The situation could be further compounded by a poor rainy season, the closure of the Somali remittance operators and an escalating conflict in Yemen. As of 14 May Somalia has received 6,949 arrivals since 27 March. The vast majority – around 92 per cent – are Somali nationals of whom many have refugee status in Yemen.”

Noting the need for progress on human rights, he said Somalia would take part this year in the UN Human Rights Council’s Universal Periodic Review, stressing his concerns about a marked recent increase in executions and death sentences, despite commitment to a moratorium, as well as continued presence of threats and intimidation to journalists.

The security of around 1,400 UN staff in Somalia was a priority, he said, particularly in the context of an attack in Garowe on 20 April, which killed four UNICEF staff and three Somali guards. He thanked the Council for supporting expansion of the UN Guard Unit, especially important since the Mission established offices in Mogadishu city.

“This is the first time a Security Council mandated mission has operated from outside the airport zone since 1995,” he said. “With so much at stake between now and 2016, we can expect Al-Shabaab to do everything it can to derail the political process. Renewing the joint Somali and AU offensive against Al Shabaab is an urgent priority.”

Maman S. Sidikou Special Representative of the Chairperson of the African Union Commission, also stressed the importance of such action, underlining the fact that the recent joint AU-UN peacekeeping benchmarking mission had highlighted the need to maintain the African Union Mission in Somalia (AMISOM) troop surge until the end of 2016 at least, with that date also cited as the earliest at which a UN peacekeeping force could be deployed.

Successes in recent AMISOM and Somali National Army (SNA) joint offensives opened up space for stabilization efforts in recovered areas but continued asymmetric warfare tactics by Al Shabaab undermined the force’s effectiveness and with it the population’s confidence. Force enablers and multipliers, such as helicopters, authorized under UN Security Council resolution 2124 (2013) were lacking and reduced the agility and flexibility needed to counter Al Shabaab’s tactics.

Mr. Sidikou also addressed the AU’s report on allegations of sexual exploitation and abuse by AMISOM soldiers, noting that two of the allegations made were proven and that the investigation made several observations and recommendations to strengthen existing mechanisms to address abuse.

He pointed to specific actions taken in response, including development of a Whistle-blower’s policy expected to be passed by the AU’s policy organs this year, as well as preparation of a draft Annex to the existing Memorandum of Understanding between the AU Commission and the troop and police contributing countries aiming to make responses to any future allegations more robust.

“We will continue to respect the dignity of all Somali women and girls and to uphold the religious and cultural values of Somalia as AMISOM continues to implement its mandate to restore peace and stability in the country.” Mr. Sidikou said. “[I] reiterate AMISOM’s leadership commitment to enforcing the AU’s ‘zero tolerance’ policy.”