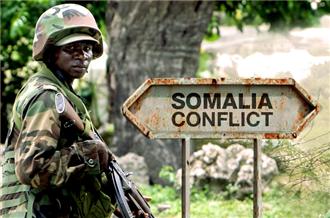 [/vc_column_text][/vc_column][/vc_row][vc_row][vc_column][vc_column_text]Minneapolis, MN – On May 1, 2012, the UN Special Representative (SR), The African Union Special Representative (AUSR), and IGAD Facilitator for Somalia (IGADF) distributed a press release threatening those they call spoilers of the Somali political process with sanctions. Here is how they articulated the threats which they might impose on the movement, including sanctions and other unspecified measures:

“… the United Nations, the African Union, and IGAD are jointly issuing this unambiguous warning to all potential spoilers: non-compliance with or active obstruction of the Road Map for ending the Transition in Somalia will be referred to IGAD Council of Ministers with our recommendation for immediate imposition of specific measures and restrictions. Moreover requests for further sanctions against spoilers may simultaneously be referred to the United Nations Monitoring on Somalia and Eritrea in order to open an investigation under the terms of the UN Security Council Resolution 1844 (2008).”

What is the Road Map (RM) for Ending the Transition in Somalia? Does the RM has any legitimacy with Somali people? Who are the Spoilers? Is the authority of the SR, AUSR and IGADF divine such that it cannot be challenged by the Somali people whose political fate is to be determined by the RM if the SR has his way? This essay probes these questions.

The engine driving the RM is an agreement in Kampala between the President of the Transitional Federal Government, the Former Speaker of the TFG Parliament, and a former Prime Minister in the summer of 2011. These three individuals were brought to Kampala, Uganda, under the auspices of President Museveni of Uganda with the SR’s participation.

The purported purpose of the meeting was to reconcile the conflict between the three Somalis over the nature of the transitional period and distribution of political power among these three people during the remaining days of the transition which was supposed to end on August 2011.

Somalia’s transitional charter that governs the transition has been set aside by the SR in order for his group to have their way in determining Somalia’s future. Without any consultation with the Somali Parliament and the Somali people, the hosts forced the three TFG personalities to agree in Kampala. Since then the Kampala Accord has become the force behind the Road Map.

In-depth coverage of the regional political crisis
For all practical purposes the Kampala Accord has empowered the TFG President, the former Speaker of Parliament, the new Prime Minister, and several of their self-selected individuals to determine the way out of the transition. The SR, AUSR, and IGADF and their Somali clients manage this process which has completely shut out the Somali people and the TFG parliament.

The Road Map is currently structured to allow the TFG President, the PM and the former Speaker of parliament (the latter is still considered by the SR, IGAD, and the AU as Speaker although parliament removed him from that post several months ago) to pick the traditional leaders who are supposed to select members of the post-transition parliament, and the congress that will approve the UN drafted post-transition constitution. In other words, the SR, AUSR, and IGAD wish to enable the very TFG President, former speaker and the current PM who failed to deliver any results during their tenure to determine the future of the country as well allow them to reappoint themselves to power.

Given that there has been no open and sustained public debate and discussion about the terms of the RM means that the UN and a small group among the TFG are the sole owners of the Road Map. Reflecting the famous American liberation motto “no taxation without representation”, the Somali democratic movement’s response to the UN Road Map is “no legitimacy without autonomous Somali ownership and input”.

Who are the spoilers? Nelson Mandela was a “spoiler and a terrorist” in the eyes of apartheid governments and their allies. So were Gandhi and Ben Bella. In Somalia, the likes of Mandela were the members of the SYL and SNL during the Italian and British colonialism.

In a style reminiscent of colonial times, the SR, the AUSR, and IGADF consider the democratic movement, the new political parties, and the independent Muslim Ulema who are engaged in peaceful political activities as spoilers. These groups have carefully studied the UNDP drafted constitution and found it to be opposed to basic Somali and Islamic values. They have openly rejected the UN owned draft constitution without resorting to violence and have begin to mobilise the population.

Not only do these civilian groups find the constitution anti-Somali, but they view the entire RM which is supposed to lead to the post-transition political order utterly illegitimate. Somalia’s democratic and peace movement is challenging the authoritarian operation of the UN, the AU, and IGAD. It is this non-violent and unarmed movement that the UN and its partners dub as spoilers and threaten to punish. Apparently, the UN, AU, and IGAD consider good Somalis to be child-like on whose behalf they can act politically, or terrorists and spoilers who should be sanctioned and punished using AU/IGAD and UN instruments.

The history of liberation movements in Africa and elsewhere provide ample examples of democratic movements and liberation leaders who were vilified and persecuted by colonial and imperial powers. But the determination of the African people and their pursuit of justice and democracy ultimately prevailed.

It is ironic that the UN and AU which supported the liberation movements in those years are now acting as instruments of Somali subjugation. Further the UN has been vocal about the rights of people in Syria, Libya, and elsewhere in the Arab World, however, the UN considers the rights of the Somali people to peacefully mobilise themselves in order to determine their destiny to be a criminal affair that must be sanctioned and punished.

The use of threats by the SR, AUSR, and IGADF demonstrate how these institutions are used for undemocratic and unjust political ends. Such behaviour reinforces the established idea that the UN, AU, and IGAD do not have the Somali people’s interest at heart and that the UN Monitoring Group for Somalia and Eritrea is a partisan organisation set to subjugate independent Somalis who dare to stand up for their rights and those of their country.

The SR and his African counterparts at the AU and IGAD have presided over a political project in Somalia that has delivered nothing but failure and misery over the last decade and half.

About three years ago, the UN led international community concocted another TFG for Somalia which is now accepted by all parties to be frighteningly corrupt and incompetent. Most recently, the SR, AUSR, and IGADF were caught sleeping on the switch as tens of thousands of Somalis starved to death and millions were devastated by the famine; while the monitoring Group has been implicated in the production of the famine.

Given this record, it is reasonable to conclude that the SR, AUSR, and IGADF think of Somalia to be their colony rather than belonging to Somalis. Their latest effort to cower the Somali civic movement into submission is designed to install more incompetent and illegitimate political order that does not respect the dignity of the people and the integrity of the nation. This agenda is as audacious as any former colonial scheme and will destroy the Somali Republic if it is not stopped.

Finally, the only “crime” the Somali democratic movement has committed is to dare dream of freedom in the land of its birth. By demonising the Somali democratic movement as spoilers, that must be punished, the United Nations and the African Union are behaving like the autocrats in the Arab World which the Arab Uprising is trying to flush out of political power. They can try to impose an apartheid-like political order on the Somali people because AMISOM which is not accountable to the population and funded by the United States and Europe controls Mogadishu.

The hope was that AMISOM, as African brothers, will defeat al-Shabaab and give the Somali people a chance to rebuild their country, but that hope has been dashed as the UN and the AU try to suffocate Somalis’ democratic aspirations. Fortunately the Somali democratic movement will endure the latest humiliation and shall prevail sooner or later as they seek freedom, justice, and democracy in their own home.

The views expressed in this article are the author’s own and do not necessarily reflect Al Jazeera’s editorial policy.[/vc_column_text][/vc_column][/vc_row]