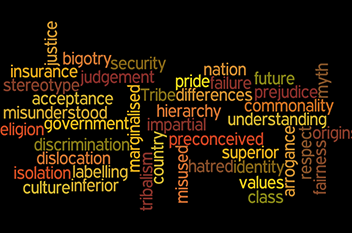 Glancing back at centuries in my peoples’ patriarchal lives, warrior-life-style coupled with artistic creativity by nature in the form of poetry and ballads was the only fashion(s) someone or some tribe would demonstrate their status all and sundry. Livestock possessions especially the camel was the epicenter for tribal pride and magnanimity over their peers in their socio-pastorals community dispersedly lived across swaths in the horn of Africa. Forceful displacements for land expansion(s) and confiscations of the possessions (livestock) in the form of robbery amongst the major clans were the reason to wage wars on each other, where the literature “a more propagandistic than realistic” was as well the mere mainstream media.

This life-style prior to the centuries however, had been gradually conformed into a low profile driven civilizations, where the tribes from the same ancestral-roots had formed small villages fitted for their existence. This was the unpopular villageization evolution, where those who bankrupt their livestock due to the tough seasonal droughts or wars were the class to venture village adventures. Strict cultural norms and values amongst the societies was the rule of law at the time. Though, the people were 100% Muslim; the Muslim theology was relatively lesser, as the Dervish (a sufi Mulism ascetic path) known for their chants to commend Prophet Mohamed (Pbh) were the major source of the religion. Yet again, it is undeniable that this was a good ground that had preserved the people from the deceitful and daring influences of the Christian ideologies.  Sultans, tribal chiefs and elders were the only leadership elite class that would broker, arbitrate and decisively reach a resolution towards any issues. Strong cultural based conflict practices were the binding principles for achieving a lasting resolution to any problem(s) so happened between the tribes. Any breach of the resolution or any failure to comply with such cultural norms by a tribe or individual__ forfeiting of wealth (livestock), social ostracism or complete disenfranchisement were like the penalty-codes to be slapped with. Where as on the contrary, full compensation(s) to the loss so happened, exchanging brides and creating new affinities between the hostile tribes were like cementing the resolution to perpetuate the peaceful coexistence of the society.

When the western colonial powers (The so-called British Somaliland) disembarked into the Somali territories in the mid 1880s, they studied about the tribal affiliations and how they could simply be manipulated by just using the elite class we have mentioned earlier. As the history narrates, there were apparent moral and armed rebellions erupted between what the colonial conquerors had to dictate and the solidness of this culture. The Dervish armed rebellion headed by Mullah Mohamed Abdullah Hassan and the clear stance(s) by the Sultans at the time are a good example for it. Never-ever-bow to what the disbelievers import was the tactical warfare underpinning my peoples’ inner strength to confront this alien invasion. Notwithstanding, the British had defeated the Dervish (Darweesh) led armed rebellion by using some of the major tribes. This is very long and vast history in fact, which a single piece of writing would never be enough to be recapitulated, but mission of mine is to precisely shed some light on the chronology of the early lives and culture of my people, which could presumably be the roots of today’s tribal ill practices.

Though, I have shared the same once before with my friends on the social media (FB), allow me to share it here with you all again verbatim. Back to my varsity-days in India, the final year of my Master Degree program__ unlike the common Indians who mainly do not bother about the global affairs; a young dynamic varsity mate approached me and asked where I was from? I vividly replied, “I am from Somalia”. Somalia! Can you please tell me why Somalia never stabilizes for quite long time, he asked?  My reply “It’s all about tribalism”. Tribalism! The man says!!! What does that mean please? He asks again. He continues, ‘do you mean because of different religious believes or cast-system? As both the former and the later are of the root causes of Indian communal fights. I said no, yet I told him about having one religion, one language and culture; absolutely a homogeneous people in the horn of Africa.  So what, he asked? To find the answer for this question__ Hmm, I twisted my brain to come up with a lasting yet digestible an unequivocal answer, but I could not. I eventually drew ambiguous reply perhaps to get myself out of this shameful embarrassment.  This has drastically taken me far beyond words, as I have asked myself many times about tribalism and how these sinister practices have become a nationwide outbreak.

What is a tribe?

Ontologically, we can say it’s an identity based on solid proximity and kinship that separates someone or some tribe from others within the people or society in an area, a country or a continent etc. It’s a genealogy and mythology related architecture which enable people uphold and preserve their identity in the longer run, so that their roots would ever be kept intact. I think I won’t be good enough to draw a better or more in-depth definition(s) to the question above than those who specializes in Metaphysics or   Engaged theory, as they can help us understand more about the social complexity structures and their interrelations through more empirical analysis. This paragraph is from personal research in an attempt to know about what tribe could mean in different cultures globally and to let myself be equipped with all the necessary resources to give a concurrent answer to any future similar question posed by that young Indian guy.

But the question is, “would the subjectivity of my answer any way do with the objectivity of such question”? The answer is an emphatic “NO”.

Being a Muslim by Allah’s grace, the below verse in the Holy Book (the Qur’an) which is quite explicit to the subject matter was always clicking in the back of my head, and as soon I have read about it with my full attention; I confess, there is no a single more convincing unequivocal statement than the below in regard with my query above where Allah SWT says:

O mankind! Indeed; We created you from a male and a female and We made you nations and tribes that you may know one another. Indeed, (the) most noble of you near Allah (is the) most righteous of you. Indeed, Allah (is) All-Knower, All-Aware.

Repeating this verse in the holy Qur’an several times, I was finding myself like absorbing in a great deal the very substance of our genetic impulse that goes alone with every heartbeat of ours (tribe devotion), and how Allah SWT clearly praised those who are righteous but not those whose tribal egos lays their bricks to build a foolish status. I am asking myself since our doctrine preaches this, why satanic doctrine?

Tribalism and its discontent

From Somali practices perspective, tribalism is nothing more than supremacism driven psychological notion and as Somalia slipped into the decades long vicious circles, tribal affiliations have enormously re-emerged and took the power from a vacuum. However, some of the tribes have collectively succeeded to set up Defacto state and intern survived from the ongoing deflagrations of the southern Somalia. Somaliland has opted for secession in the mid-1991 after the collapse of the dictatorship regime. Puntland have later on joined in a relatively lesser role and formed an autonomous or semiautonomous state of Somalia, where they have also succeeded to nurture peace within their territory.  The rest of what was the greater Somalia have relatively failed to achieve a consensus to promote peace amongst their people and still copes with the burdens of instability, local and imported (the AU).

Tribalism is the source of the Somali problems in toto; it’s an institution where the wordmongers, shameless cultural leaders, corruptive politicians, heartless warlords, jackals and Trojan horse(s) hired by Somali enemies graduates. Tribes are the root cause of their problems as they are the hard cheque(s) which these groups use in their best interest but not the common interest. It acts as the only platform where the failed part of the society from within and the Diaspora attest their disqualifications and joins uncensored into the political stir of the country. Yet it’s, where the mindless tribes who facilitate them do their job are the collective victims of what they have sowed by their hands alone. In other words, it’s like an expiry-free death certificate issued for the elimination of hundreds of thousands of Somalis. Believe me, “tribe affiliation is what can buy you the power today in Somalia”, no matter how your background exposes your incompetency__ still you can simply be a Minster, MP, VP or even the president of the country.

Bias, nepotism, opportunity-centrism and power concentration to clan affiliations are what drives the whole nation. A captain without proper navigation system had sailed off the ship of my people (country) with no lifeboats and left floating unattended for more than two decades. People are suffering and had been suffering from a pain the causation of which was diagnosed (tribalism) but kept uncured.

Somalia is a country where tomorrow lies for; people seem to be disappointed and losing the patience to meet what their future has in store for them. Let’s not be disappointed because the solution to our problems still lies in our hands, read about the world history to know what had happened in Somalia still amounts only fractions to what had happened in all the continents.

Let’s say ‘NO’ to tribalism; let’s say ‘YES’ to governance and prosperity.