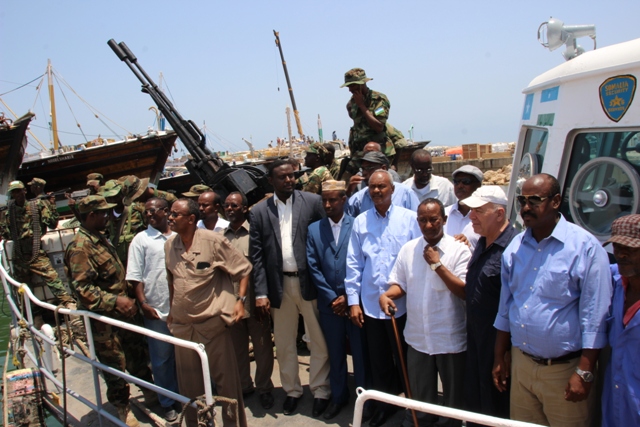 Somalia’s semi-autonomous region of Puntland has moved to combat illegal fishing in its waters – the first ever move to fight against the illegal business in the horn of Africa nation.

A Coast guard dispatched from Bossaso port on Wednesday to patrol the waters and prevent illegal fishing activities.

Minister of Fisheries and Marine resources Abdinur Ilmi Binde told journalists that the administration has been working with local security agencies to address overfishing and prevent foreign trawlers from plundering their waters of the tuna needed to grow the region’s economy.

“Illegal fishing is a serious matter and not only our enemy but also the world. Therefore, all countries agree that it should be eradicated completely.

“We hope to bring illegal fishers to justice, and send a clear message that we will not tolerate pirate fishing,” said the minister.

Following the downfall of Somalia’s last functional government in 1991, the country’s 3,330 km (2,000 miles) of coastline — the longest in continental Africa — has been pillaged by foreign vessels.

Last year, Puntland President Abdiweli Mohamed Ali described illegal fishing as a ‘’natural disaster’’. But influential Politicians and businessmen have been found of facilitating the illegal trade by bringing in trawlers to the regional seas from countries such as Iran, Yemen and other Asian countries.

Somalia waters, particularly off the coast of the semi-autonomous state of Puntland in the country’s North, contain some of the world’s most important stocks of tuna, anchovies, sharks, rays, lobsters, and shrimps, but they are barely monitored or policed, and wide open to legal and illegal plunder.

The illegal fishing industry is now estimated to value 4-9 billion U.S. dollars a year. Another report claims that an estimated $300 million worth of seafood is stolen from Somalia’s coastline each year, a huge amount that would be enough to build basic infrastructure in the war-ravaged nation.

Somali fishermen in various regions of the country also complained to the international community about the illegal foreign fishing, stealing the livelihoods of poor fishermen, waste dumping and other ecological disasters, including the indiscriminate use of all prohibited methods of fishing: drift nets, under water explosives, killing all “endangered species” like sea-turtles, orca, sharks, baby whales, etc. as well as destroying reef, biomass and vital fish habitats in the sea.