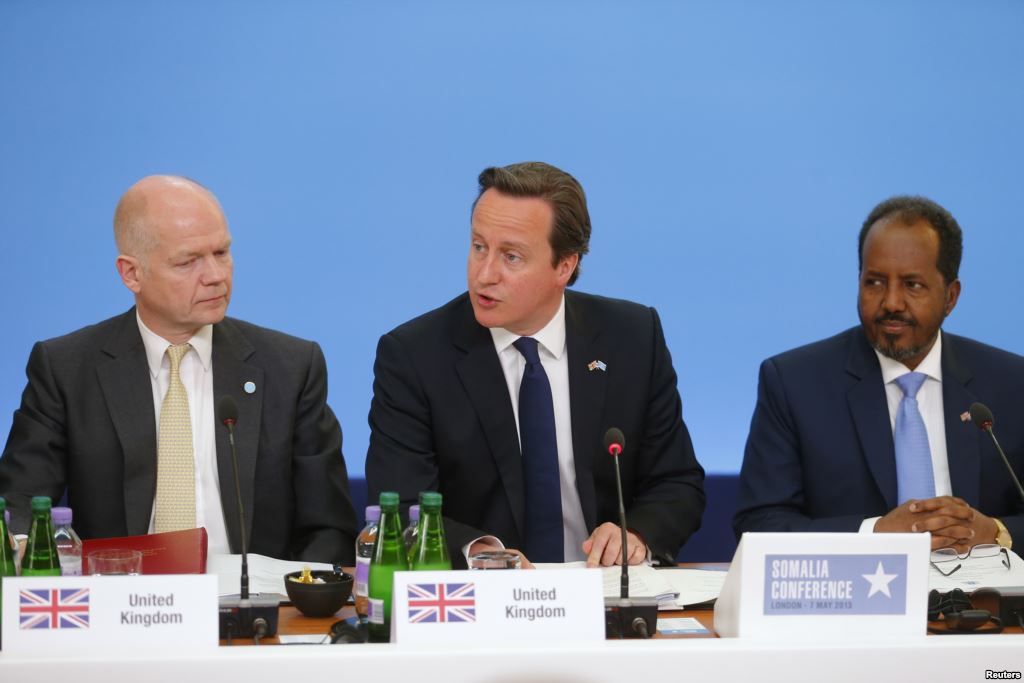 [vc_row][vc_column][vc_column_text]LONDON—More boots on the ground, proposed attacks from the air, and a warning from Britain’s prime minister that the overwhelming threat to Somalia comes from the Al Qaeda-linked insurgency group Al Shabab.

A decidedly military agenda was set on the eve of Thursday’s international conference on Somalia, where world leaders have vowed to address the country’s problems — from poverty to piracy.

But it is conquering the Shabab, the Somalia-based militant group that has been fighting the country’s Transitional Federal Government and outside forces, that appears to be the conference’s main focus.

“There is a terrorist threat that is current today, and if we are not careful, could get worse,” British Prime Minister David Cameron told BBC’s Somali service Wednesday.

The Guardian newspaper reported this week that Britain and other European nations have considered launching airstrikes against the Shabab, which controls much of the country’s south.

Meanwhile, the United Nations Security Council voted unanimously Wednesday to send more than 5,000 more troops to join the African Union forces fighting the Shabab, creating a force of nearly 18,000. Kenyan soldiers recently deployed to the country would join the AU mission now being waged by Uganda and Burundi.

While some celebrated the news of increased military funding and additional AU forces, others lamented the hawkish tone of the conference.

International aid agency Oxfam said in a report issued Wednesday that the United States and Western countries had only exacerbated Somalia’s problems in the past by setting counterterrorism issues as the priority, rather than focusing on humanitarian needs.

The two are intricately — but not exclusively — linked.[/vc_column_text]

[blockquote text=”“There is a terrorist threat that is current today, and if we are not careful, could get worse,” British Prime Minister David Cameron.” show_quote_icon=”yes” text_color=”#818181″][vc_separator type=”transparent” position=”center” up=”3″ down=”0″]

[vc_column_text]Last year’s devastating famine that killed an estimated 29,000 children in Somalia was blamed in part on the Shabab’s fighting and its ban on outside aid groups in regions where they were most needed due to the drought.

But Somalia’s UN monitoring group was among those that also blamed corrupt government officials, who stole foreign funding, and restrictive U.S. terrorism policies that tied the hands of aid groups operating in Shabab-controlled areas — creating a perfect storm for disaster.

Adam Matan will not be attending Thursday’s unprecedented international meeting, but like many among the 1.5 million Somalis living abroad, he will be closely watching the proceedings and dissecting the message that is sent.

Not that the 24-year-old expected he would sit alongside Cameron, U.S. Secretary of State Hillary Clinton, Canada’s Foreign Minister John Baird and other dignitaries to discuss solutions for his homeland. But Matan, a British university graduate who left Somalia when he was 13, purports to have 55,000 online members of his revolutionary group known as the “Anti-Tribalism Movement.”

He said he started the group for young Somalis in 2010 to counter the notion that Somalia needs to be divided along traditional clan lines, and to oppose the propaganda of the Shabab, which has lured foreign recruits from Britain, Canada, the U.S. and elsewhere.

But the success of the youth activists in the Arab Spring has breathed new life into his movement — and Matan says there is frustration that Somali youth have not been more involved in consultations for this conference.

News Wednesday of an increased foreign military presence was opposed by most of his members, Matan said.

“By the time they kill one Shabab from the air, they kill another civilian,” he argued. “Is it worth it?”

Matan said he expected peaceful demonstrations by the Somali community outside the conference Thursday.

“They’re sending a message to Cameron, saying: ‘You do the right thing, you’ll be a national hero for Somalia. You do it wrong, you will be the same as any other criminal.’ ”[/vc_column_text][/vc_column][/vc_row]