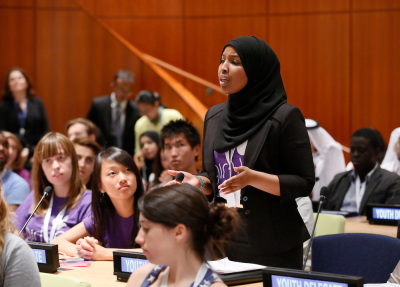 As the daughter of Somali immigrants, Munira Khalif says she considers her activism an obligation to give back.

When Munira Khalif was younger, she wanted to somehow use her education to give back to her parents’ native country, Somalia.

Khalif, a senior at Mounds Park Academy in St. Paul, founded a nonprofit, lobbied for legislation against child marriage, became a teen adviser to the United Nations’ Girl Up campaign and performed an original spoken-word poem for Nobel Prize-winner Malala Yousafzai and U.N. leaders.

“She is an inspiration to her peers,” said Kari Kunze, Khalif’s speech coach at Mounds Park Academy. “She is somebody walking the walk, not just talking the talk. It makes it very real. You can be a kid and still have a voice and do important work.”

Khalif, who lives in Fridley, is a personable teenager with an impressive list of activities.

Her peers and teachers have said that she thinks critically about what she says and how she says it. She exudes confidence and grace in a way many twice her age have yet to master. She piles on extracurricular activities, but makes time for sleepovers and cooking with her friends.

As a high school freshman, Khalif already had a taste for activism.

She started the nonprofit Lighting the Way, which helps East African diaspora youth empower their counterparts in the Horn of Africa by making education accessible. The organization has raised about $30,000 to provide scholarships and tackle sanitation issues. An organization in Kenya donated $250,000 to help build a library in Somalia.

Khalif is also a global youth ambassador for A World At School, a campaign focused on ensuring universal education.

Khalif also founded a Social Consciousness Club, a platform for students to discuss domestic and international issues, such as hunger in America and foreign aid.

As a teen adviser for the U.N.’s Girl Up campaign, she mobilized young people in her community to send letters to Congress in support of legislation fighting against child marriage.

During her sophomore year, she was invited as part of Girl Up to attend Malala Day at the U.N. headquarters in New York. The 2013 event honored Yousafzai, the Afghan girl who this year became the youngest Nobel winner ever, sharing the peace prize at age 17. There, Khalif performed her spoken-word piece for Yousafzai, youth delegates and U.N. leaders, including Secretary-General Ban Ki Moon.

The poem was a tribute to Yousafzai’s bravery and “girls like her who continue to fight for fundamental human rights and education.”

Most recently, she was awarded the U.N. Special Envoy for Global Education’s Youth Courage Award, which honors young people fighting for universal education. She was one of nine chosen from around the world to receive the honor.

“That was the highlight of my entire high school career,” Khalif said. “I was just bewildered.”

“The sheer ripple effect of educating a girl is huge, especially in developing countries,” Khalif said.

Khalif is the daughter of Somali parents who fled the civil war there in 1992.

“Having parents who fled from civil war changes your entire perspective. That makes you realize the opportunities you have in the United States and use those to its fullest extent,” she said.

She recounts stories in Somalia of her mother’s father making sure his daughters had an education during a time when most girls did not.

“Because my mom was able to receive this gift of education, I felt I had an obligation to give this gift back,” Khalif said.

And she was told stories of female Muslims who were “leaders of their time.”

“So being able to see my own reflection in the mirrors of history were very important and pivotal growing up.”

Khalif is inspired by stories from the civil-rights movement, as well as by her favorite book, “The Souls of Black Folk” by W.E.B. Du Bois, the Beat poets and spoken-word artist Saul Williams. She uses these platforms to inspire her spoken-word poetry, which she calls her “identity.”

It’s been her way to “find a place as a minority in the United States.”

“[All of that was] influential in growing up but also [has] helped me a lot in figuring out who I was,” she said.

Spoken-word poetry has played a large role in her academic life.

Khalif is in her fourth year of performing poetry on the Mounds Park Academy speech and debate team. She was recently named the 2014 Minnesota state poetry champion at a speech competition.

“She has a strong sense of social justice,” said Kunze, who was Khalif’s Spanish teacher five years ago. “She has a beautiful voice and a beautiful point of view.”

Khalif said she is grateful to the school for prompting students to grow as thinkers. She said teachers at Mounds Park expect a lot from their students: “They force you to actually think in a larger sense of how you can play a larger role in this world.”

For most high school seniors, this time of year is crunch time for college applications.

Khalif is no exception. She’s put her extracurricular activities on hold to polish her college applications for early-decision deadline.

She doesn’t have a dream school in mind, knowing that most schools are selective. She does want to work in government, continue her activism and spoken-word poetry, and someday return to Somalia.

“I want to be part of the dialogue back home [in Somalia],” Khalif said. “There’s a lot of peace-building happening in Somalia, and I want to be a part of that when I get older.”

A lot of people say they are going to change the world and they have the best intentions, Kunze said.

“But Munira is somebody who probably will change the world,” Kunze said.