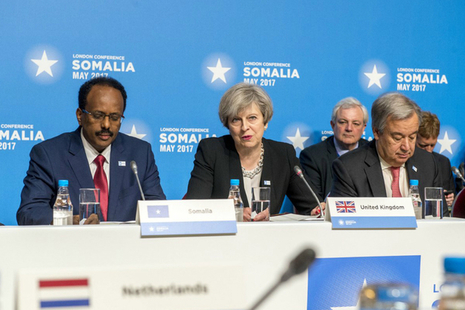 On Thursday 11 May, Prime Minister Theresa May, President Farmajo, Foreign Secretary Boris Johnson and a group of global leaders attended this year’s London Somalia Conference. Among a number of issues, the conference discussed the Security Pact, adopted by Somalia and the international community, which will allow for sustainable security based on mutual accountability.

These were the main takeaways from the conference:

In her speech, May outlined the importance of the Security Pact. The pact ‘will improve the coordination of international efforts, including the UK’s commitment to train Somali forces in Baidoa, the UAE’s development of a state of the art training facility, America’s training and equipping of Danab Special Forces and Turkey’s work to train Somali officers and NCOs.’

The pact will see the drawdown of AMISON troops as Somali forces improve their capacity to counter terrorist threats. To enact the details of the pact, May commited £21 million over the next two years.

The conference also called on the international community to continue its support for Somalia during the ongoing drought. So far, upwards of $600 million in aid has been raised for Somalia. Following the conference, the communique welcomed the UN’s revised Humanitarian Response Plan, calling on the international community to cooperate in its implementation.

While the goal is to address an immediate humanitarian crisis, the UK government envisions long term solutions. As it says in the communique: ‘We….commit to working together to support Somalia’s longer-term recovery and resilience building from this drought.’

A Stable and Prosperous Nation

With President Farmajo in attendance, a new partnership for Somalia was proposed through which it ‘will commit to a four year roadmap of reforms that include closer cooperation between Mogadishu and the regions of Somalia on security and stabilisation – and a political agreement on resource and power-sharing that can lead to a revised federal constitution.’

The goal will be the development of an inclusive and federal democratic state. The partnership will also see Farmajo work towards a fairer and more accessible justice system. In return, the international community will back these reforms with targeted support for economic recovery – with a particular focus on agriculture, livestock and fisheries sectors.

We commend the international community’s commitment to improving Somalia. The areas discussed in the London Somalia Conference will not only bolster the nation’s security, but ensure our nation’s resources, economy and democracy are managed effectively. The resolutions will also be good news for the diaspora, whose social and financial connections to Somalia will be reassured by the commitments to democracy and economic transparency.

The security pact and the new partnership will hopefully lead to brighter prospects for Somali people, enabling them to build the country they truly deserve.

As part of the occasion, ATM held their own discussion on the main themes of the conference – security, political reform, economic development and humanitarianism. We brought together members of the Somali diaspora and discussed the on-going crisis, success stories and challenges of diaspora engagement in Somalia, and recommendations regarding the international community’s response.

For full details on this year’s London Somalia Conference, the official communique can be a accessed here.