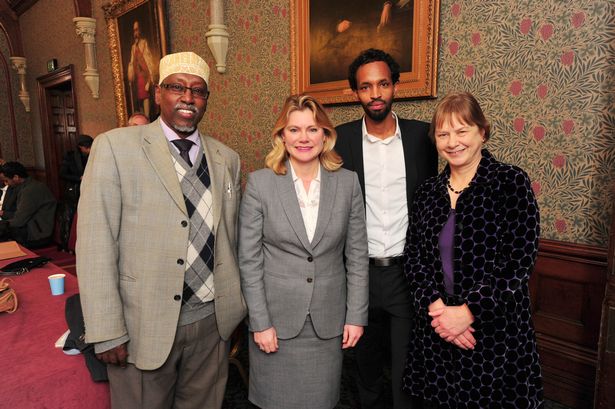 Ms Greening set out the government’s aim to create a more peaceful, stable and prosperous Somalia while listening to people’s opinions and concerns at the gathering in Ealing’s town hall on January 9.

She discussed how they are working towards re-enabling remittance payments into the third world country after these were stopped about three months ago.

Adam Matan, director at the Anti-Tribalism Movement-the biggest Somali youth led organisation with more than 110,000 members and huge supporters from all over the world, said: “It was great to have the Secretary of State come and listen to the community and she has assured us that she will look after the situation.

“The Anti Tribalism Movement would also like to thank MP for Ealing Central and Acton, Angie Bray, for her sincere commitment, dedication and energy as well as political capital. We are very lucky to have a local champion that helps us.”

Ealing has a large Somali diaspora and so the meeting addressed how people in the borough can help one of the world’s poorest countries.

Ms Bray said: “I invited Justine Greening to meet the local Somali community to discuss a number of issues in Somalia and here in the UK – especially the loss of the facility which enabled the Somali diaspora to send remittances back to Somalia.

“This happened when the banks stopped supporting the accounts of the companies involved in facilitating the money transfers and it is causing great concern.

“The Secretary of State listened carefully to the impact this is having and explained what the Government is doing. I think it proved to be a very useful meeting.”

Ms Greening said: “The links between the UK and Somalia are very strong. I want to hear from Somali people based here in London about what they want the DFID’s (Department for International Development) programme in Somalia to focus on. Together we can help the country and its people reach their full potential after years of devastating conflict.”

She added: “I understand remittances are an important way for Somalis in the UK to support friends and family back home. They also support development.

“That is why my department is championing a number of initiatives to keep these vital channels open while making payments secure.”

By 2015, Britain’s aid programme will help secure new private sector jobs and training for 45,000 people including 15,000 women, 700,000 people benefit from agricultural or livelihood assistance to grow their own crops, and 61,000 young children to avoid acute malnutrition.

To find out more visit: www.gov.uk/government/publications/dfid-somalia-operational-plan-2013.