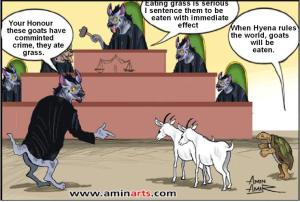 The Somali justice system is shambolic. After the country’s seat in the UN was reinstated, the new Somali government did not make justice its priority. Assuming that clan justice would provide some sort of rough even-handedness whilst neglecting a vital part of governing institution. The new Somali government is riding high on a horse called 4.5. Appointed judges, court clerks and law enforcers are comprised of individuals who have no experience in the judiciary system and yet are expected to conduct justice as they see it fit. This has lead to wide spread power abuse: carpet bagging, arbitrary arrests and arresting innocent people without warrant. Young men have been charged and incarcerated only for their bullet-riddled bodies to be found dead in the dusty streets in the outskirts of Mogadishu. Dangerous criminals are released from jail on the pretence that the law has not been written yet, therefore there is no article which finds these men guilty of terrorism charges. These terrorists have walked free.

Rape crimes have gone through the roof. President Hassan announced one morning that rape had become punishable by death. This law was passed without the consultation of a council or fellow MP’s but instead was made in the manner by which the country is accustomed; with the mentality of dictatorship. This had very serious implications. Before the death penalty had been imparted, young rape offenders who had been named and shamed as a rapist had been punished by their elders and clan members. The new law, however, meant that an entire clan would protect any rapists within their midst as it was not acceptable for them to lose a male life. As such, men are now more confident to rape women because they know their next of kin will protect them from the death penalty. President Hassan’s own law backfired; he would have been well advised to consult with elders both male and female and the law enforcers, before passing a law without any idea of possible ramifications. In Somalia, female elders are more reasonable and rational individuals but, sadly, their opinions are overlooked and pushed aside by both the Somali government and UNSOM.

On the other hand, it is difficult to provide justice for all when the governing system itself is based on 4.5 unjust systems. The way we see this odious political system, was that Somalia was sinking in an ocean of civil war. The international community, for peace sake, has turned a blind eye on the fact that the warring clans are united in ostracising the “cadaver eaters”.

Other groups who are peaceful and productive were included in the marginalized groups of people. These people are the Reer Xamar, Beizanis, Reer Barawe, Bajuni, Jareer weyne and numerous other clans who did not engage in the civil war. The dominant clans were given the green light to abuse the people they see as ‘abuseble’. The clans abused at will and nothing held them back. The 4.5 governing system opened a can of worms. Not only has the International Community agreed to push aside the law-abiding, hard-working, productive and peaceful people of Somalia, but the International Community goaded the dominant clans rather unwittingly to ‘out-bad’ each other. It is not a rocket science to figure out that something that is rewarded gets promoted.

Many peacful clans are now given no choice but to face extinctioon or fight back. it is sad the UNSOM has abdicated its responsibility on this issue. UNSOM has to take the minorities on board for Somali peace and reconciliation. I spoke to Eng Yarow Sharef Aden following his attendance at Chatham house on the 9th of May 2014. He stated his concerns and the following are his points:-

1- Reconciliation has to be the first priority because without genuine reconciliation nothing can be done to deal with insecurity.

4- Inclusiveness in security forces, where all clans are equally represented

5- Disarming off all Somali clans and gangs.

6- Creating an atmosphere of trust between civilians and government security apparatus.

7- Rehabilitation of militants in responsible manner.

8- Formation of local administrations from the grassroots (Bottom up approach), with inclusiveness, justice and fair manner.

9- Repatriation and relocation of refugees and IDPs has to be implemented with cautious to avoid land disputes that can lead to civil war.

10- International community to support the security initiatives by working closely with the Somali Federal government.

An activist advocating for Somali disadvantaged and Marginalised groups.