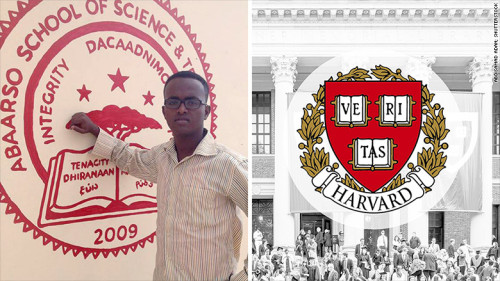 Abdisamad Muhiyadin Adan, a 20-year-old Somali student from Hargeisa, has been accepted into Harvard’s freshman Class of 2019 on full scholarship.

Abdisamad graduated from Abaarso School of Science and Technology, a competitive school that is it trying to “[establish] an elite Somali educational institution to lead the development of future Somali leaders for the decades to come,” according to its website.

“I’m not the smartest kid in Somaliland but I’ve had [the] opportunity [to attend Abaarso],” Abdisamad told CNN.

He will start his undergraduate studies in September.

When he got his acceptance letter, he told his grandmother that he will go to Harvard, a school that she had never heard before.

“Harvard does not mean a lot to her, but when she realized I got into the one I wanted, she was very happy,” Abdisamad said.

Abaarso School was founded by an American hedge fund manager named Jonathan Starr with half a million dollars of his own money. He quit his job in finance to be the headmaster of the school.

Abaarso is planning to expand to serve more students with additional classrooms, dorms, computer labs and staff housing after it received $291,000 funding from the United States Agency for International Development (USAID) and the non-profit Horn of Africa Education Development Fund (HED).

The school has provided $2.5 million in scholarships to 24 students, 19 of whom are attending schools in the U.S., according to the school’s website.

Starr said many universities in the U.S. and other Western countries think students in Somalia are not qualified to attend their schools. To overcome the challenges, he has been making tours and promoting his school. His students study abroad for a year to gain some exposure to the rigorous academics at the universities.

For instance, Abdisamad studies at a school in New York for a year. “I wouldn’t have had the opportunity to do the SATs [a standardized test used for college admissions in the United States.] if I hadn’t gone to America,” he said.

Abdisamad said he is interested in studying economics and political science. “I’m just trying to put myself day after day in a better position to help my country,” he said.

Is he ready for Harvard’s rigorous academic demands?

“People kept telling me that Harvard is really really competitive and everyone is trying to beat you,” he said. “I was like, great. That’s what I want.”