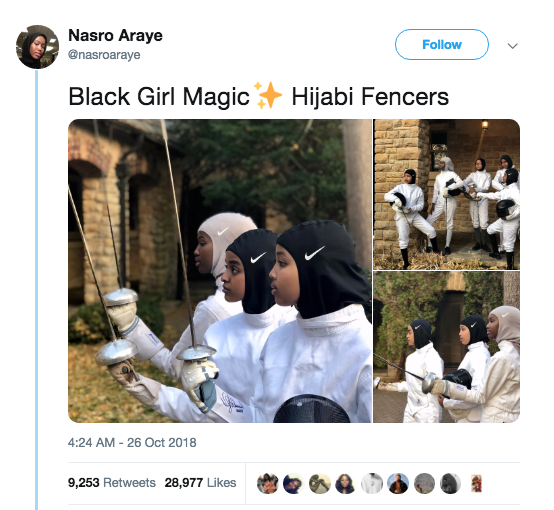 The image was reposted by Ibtihaj Muhammad, a Muslim African-American fencer and the first woman to represent the United States wearing a hijab in the Olympics. Here’s the story! 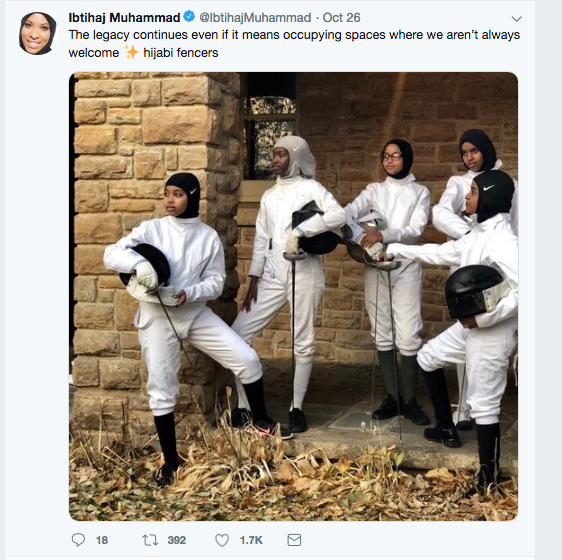 Saara Abdullahi, Nasro Araye, Salma Abdullahi, Ekhlas Abdullahi and Amina Ahmed, all aged between 15-18, kick-started their sports careers in 2014 after petition their school for sports to be made available to female’s students. It turned out that one teacher, Mrs Hicks, was an experienced fencer and took on the challenge of launching the first all-female fencing team at the school.

Soon after this, the girls began competing professionally and have travelled cross-state to compete against other teams. Salma, 16 says “at our last state match, we won third place and someone won fifth place individually in 2017”.

However, the reaction from the community has been a mixed bag. Families have generally been encouraging, for instance – one mother supports the girls financially where possible and cheers the girls on at tournaments. However, there have been some discouraging comments, “when we first started, the older members in our community told us that it wouldn’t be a good idea because we are girls and young” Salma said. The girls, however, continued the fencing, demonstrating great resilience. Salma stated that “because we enjoyed it, they let it go”.

The girls met their fencing inspiration Ibtihaj Muhammad at an event. Muhammad is the first U.S Olympian to wear a hijab during the sport. The girls were excited when she asked Mrs Hicks for their contact information and a couple of weeks later, they received Nike Hijabs.

For now, the girls are focusing on getting their US SA membership. The girls also have ambitions beyond the sport – Nasra, wants to go into the Law, namely Human Rights and Sarah, is passionate about gender empowerment and wants to work for the UN.

When asked what advice they would give to young girls in their position, who are wearing hijab. Salma advised to “take advantage of everything and be brave”.