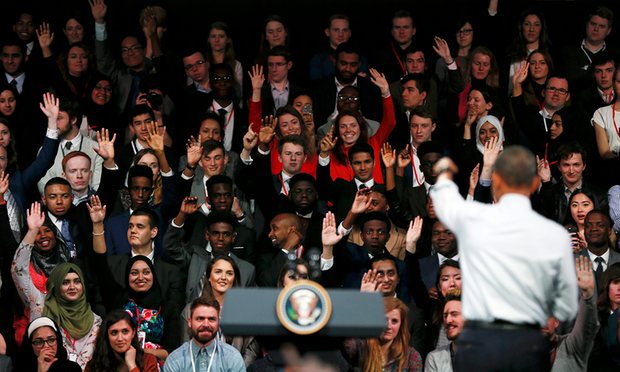 On Saturday April 23rd, at a town hall organized by and for young people, President Barack Obama answered questions on a myriad of topics including on his legacy, which popular movements had inspired him the most, his successor and LGBTQ rights with South Carolina and Mississippi having recently passed regressive anti-equality laws.

Adam Matan, a young Somali-British man asked the president a pointed question that apparently confounded the president. It was a moment that we rarely witness, with President Obama who always comes across as prepared and very informed admitting that he wasn’t familiar with the specific issues raised by the young man. The President promised to take the Adam’s contact details in order to obtain more information on this particular question and indeed White House staff did follow up. Adam asked a very specific question about American naval ship activity in the Gulf of Aden off the coast of Somalia.

It is alleged that apparently the ships have been dumping waste into the ocean including toxic waste that is alleged to be killing sea life including fish, toxic waste containers washing up ashore and devastating coastal communities according to Adam.

Admittedly, this young crowd’s questions put all of us at the White House press corps to shame with their probing, very thoughtful and well-crafted questions that clearly engaged the President.
I later spoke to Adam to ask him to elaborate further and found him quite engaging.

These are obviously the thoughts of just one young Muslim man, but I found his sophisticated and nuanced outlook one that should be considered especially given the current heated political climate with declarations about locking out ALL Muslims from the United States for example.

Karanja Gaçuça: What was your specific question and how did it feel to be personally addressed by the President of the United States.
Adam Matan: “400 young Somalis died at the Mediterranean last week and there are multiple reasons why those young men are leaving their families, communities and country behind but one of those reasons is that the International ships that have been mandated to protect the Somali sea from piracy are either dumping or facilitating toxic waste to be dumped at the Somali sea.

This has caused millions of fish to die and toxic containers to wash up at the Somali coast. This is having a devastating impact on coastal communities and Somalia as a whole, forcing many young people to make the dangerous journey of crossing the Mediterranean Sea to seek a better future.

Therefore can you kindly use your international leverage to galvanize the International community to look at this issue and formulate practical steps to ensure this doesn’t happen again?”

Karanja Gaçuça: What do you hope will be the outcome of your question and subsequent connection to the White House?
Adam Matan: The president responded that he is not very familiar with the issue raised by me but promised we would talk after the session to discuss this further and he came to speak to me at the end and agreed for further discussion with an introduction to his personal secretary.

Therefore I hope the Somali people will have an opportunity to enlighten Obama about this issue and agree on some practical steps to ensure Somali people are not dying due to toxic waste being dumped into their sea.

Karanja Gaçuça: What is your anti-tribalism movement – can you tell me a little about it?
Adam Matan: The Anti-Tribalism Movement is a non-profit organization aimed at educating and raising awareness about the effects of tribalism within (communities. The ATM’s vision and track record is based on a cohesive and dynamic society where every person’s opinion is valued regardless of clan, gender or political belief.

Karanja Gaçuça: Are you Somali, British or Kenyan or all of the above?
Adam Matan: I am Somali-British or British-Somali and more importantly a global citizen and the son of the father of mankind Adam with whom I share a name.

Karanja Gaçuça: Is there any significance as far as you are concerned that Obama is half Kenyan? Do you think that influences him in any way?
Adam Matan: It is always heartwarming to have shared East African heritage with the leader of free world but regardless of Obama’s origins, I think he has made great contributions to this world and history books will mention him.

Karanja Gaçuça: What are your personal feelings about his policies generally – especially his foreign policy? There have been lots of drone attacks across the Muslim world and in Somalia as well during his time in office. Did you expect or hope he would have ended the American wars in Middle East, North Africa and Afghanistan?
Adam Matan: The President made great contributions nationally and internationally. With that in mind not everybody agrees with all his policies but two policies that captured my heart is that he has been a great advocate of rejecting the notion of calling ISIS an Islamic state urging other world leaders to avoid associating those extremists with the peaceful religion of Islam.

The second policy has been his influence on the world to stop seeing Iran as an enemy and treat them as an equal partner. Through his leadership and courage he achieved the Iranian deal and this has potentially stopped millions of other people suffering because of conflict.

But the very controversial policy that is close to home is the drone policy as the collateral damages is devastating for law abiding and peaceful communities who have been exploited by violent extremism and may further push young people and communities to extremism.

There has been many successful drone attacks that took out the intended targets, therefore balance is needed here to ensure there is no further collateral damage leading to deaths of innocent people.

Karanja Gaçuça: What of Obama’s policies in Israel and Palestine.
Adam Matan: The two state solution has proven difficult due to uncompromising parties. Throughout the process there needs to be compassion, healing, forgiveness, compromise, understanding and dialogue. (The Palestinian Israeli issue) is a universal concern and it is the dream of mankind to see the children of Palestine and Israel living side by side peacefully without fear, discrimination and prejudice.

No children deserve to die. And I hope Obama can contribute to this process within his last 9 months to leave a blueprint. There has been no breakthrough agreement reached so far with or without Obama’s contribution.