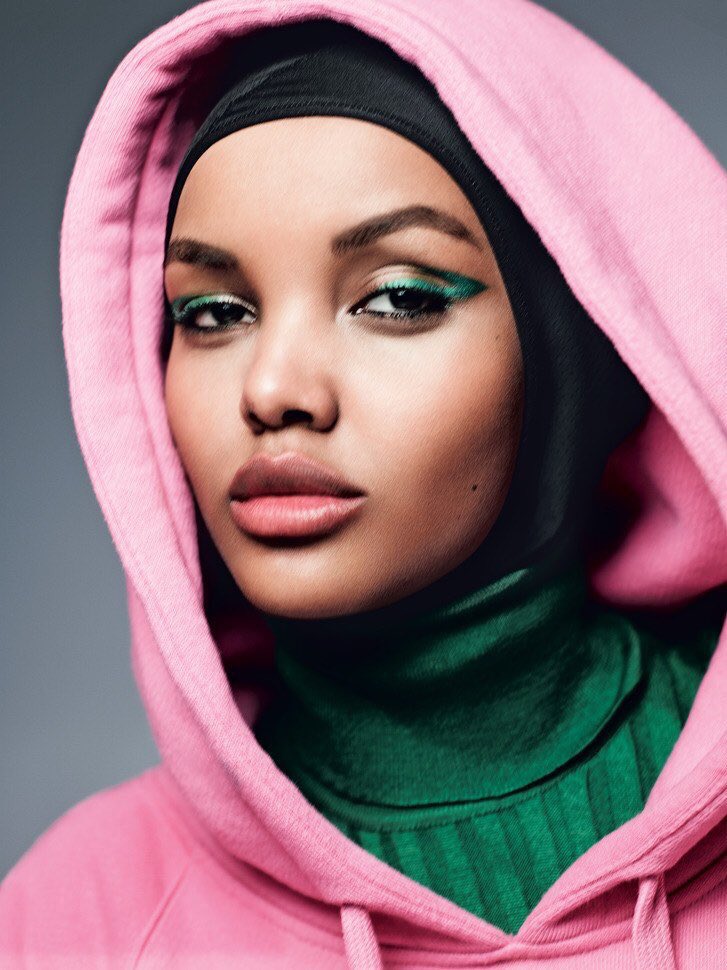 Last month, London hosted the city’s first ever Modest Fashion Festival. The goal of the event, which took place at the Grosvenor House Hotel, was to not only promote the creativity and innovation of modest fashion lines, but to also show how the outfits can appeal to anyone regardless of religion or culture.

While the runway show may yet to be a fixture on the capital’s catwalk calendar, it did feature an appearance from a model who’s fast becoming a huge name in high fashion. Halima Aden is a Somali-American model from Minnesota, whose ascent represents a welcome shift in an industry notorious for failing to embrace diversity.

Born in 1997 in a Kenyan refugee camp, Halima moved to St. Cloud, Minnesota, with her mother when she was only seven. After graduating from high school, she intended to go to university, but had little idea how to cover the incredibly expensive fees of an institute of higher education in the US.

Halima at the International Somali Awards 2017.

In a uniquely American twist, Halima discovered that winners of the Miss Minnesota USA beauty pageant were awarded academic scholarships. She entered the competition in 2016. As a Muslim woman who wears a hijab, she was slightly unsure how to broach the subject of the pageant’s swimsuit round, so she decided to ask the judges if she could wear something modest instead of the regular bikini. They obliged.

While Halima didn’t win the pageant, her appearance caught the attention of a number of people in the fashion industry. A year later, she was signed to modelling agency IMG, making her the first hijabi on the books of a major US agency.

Since then, she’s appeared on the catwalk for Kanye West’s Yeezy range at New York Fashion Week, become a face of Rihanna’s Fenty makeup line, and, earlier this summer, she graced the cover of Allure, a move that saw her become the first hijab-wearing model to feature on the front of a major American fashion magazine:

From Refugee camp to the cover of @Allure_magazine ! Thank you for the opportunity of a life time ! I am so beyond grateful ❤️ pic.twitter.com/BBv8NUFwUF

Throughout it all, Halima has not compromised her faith or her decision to dress modestly. In her interview with Allure, Halima explained why she wears the hijab: ‘It’s how I interpret my religion…but there are women who are Muslim who choose not to wear the hijab. That’s something people often forget.’

She also noted how it shields her from the criticisms often associated with the industry: ‘I have much more to offer than my physical appearance, and a hijab protects me against “You’re too skinny,” “You’re too thick,” “Look at her hips,” “Look at her thigh gap.” I don’t have to worry about that.’

Halima is a perfect example of why representation is important. By staying true to her values while appearing on platforms as significant as New York fashion week, she shows that Muslim women – whether they wear a hijab or not, whether they’re Somali or otherwise – are a proud and visible part of society.

Fashion is a hugely influential industry, and its trends and movements can have far reaching effects on wider culture. Now that major labels are launching modest wear lines and making models like Halima the face of their campaigns, it’s clear that fashion is working to become more representative of the diverse society we live in.

Fashion’s not exactly known as an inclusive field, but models like Halima are changing this. As Allure said, she’s a ‘Destroyer of Stereotypes’.