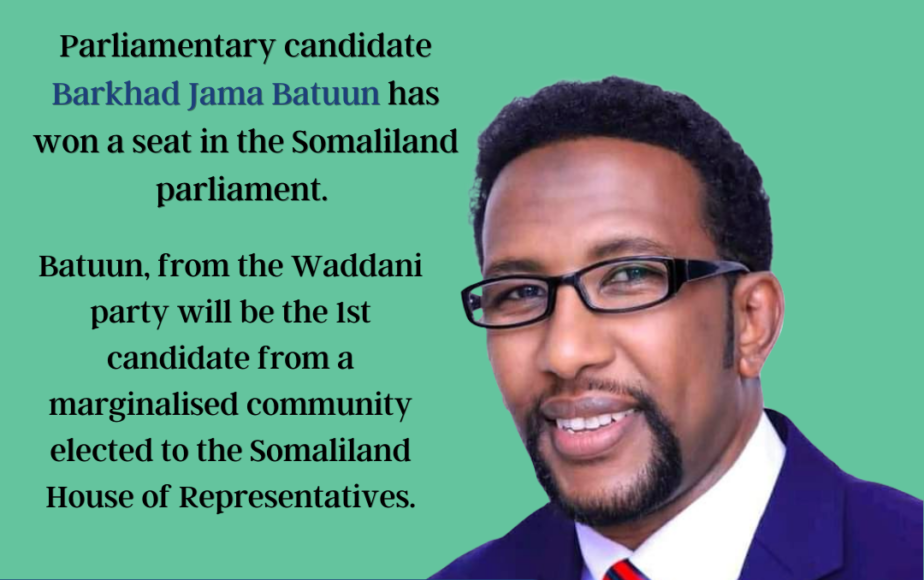 Barkhad Jama Batuun — a Party spokesman for Somaliland National Party, Wadani, a human rights activist and the son of a marginalised community from Daami — was declared the winner during saturday night’s extended vote count. He broke the chain of suppression and injustice while also making history today; becoming the first candidate from the marginalised community elected to the Somaliland House of Representatives in Somaliland’s first parliamentary election in 16 years.

With more than 1 million people registered to vote in this election, he amassed the highest votes in this election. Marginalised communities across the region were seeking ways to level the playing field in their pursuit for equality and inclusion and to ensure underrepresented groups of people are provided with equal opportunities so that they can have access to meaningful and representative livelihoods.

There was a historical false prospectus or notion that has prevailed for decades which meant marginalised communities felt as though they were never going to break the glass ceiling of Somali politics; often manifesting itself in the daily experiences of the marginalised through tribalism. However, Barkhad’s election victory must be seen as part of a broader appetite for change. His resounding victory is a hugely symbolic moment and is a repudiation of the poisonous and divisive clan politics that has been the life-blood across Somalia.

It’s very important to have a democracy that truly represents and reflects the wishes, needs, or interests of the people collectively and Barkhad’s victory is the beginning of a new era which will add to this representation; one that has been sorely missing in Somaliland’s success story.

What this experience shows is an evolving Somali political scene that has a more nuanced and sophisticated understanding of how to deal with marginalised groups that have been left behind in the political wilderness for decades. Barkhad’s journey should not be seen as a tokenistic gesture but a milestone step that presents long-overdue poetic justice.

For Barkhad to shatter the glass ceiling in such a polarising and difficult year is a powerful reminder that voters are increasingly rejecting the politics of clanism in favour of candidates who stand for fairness, equality and progressive future for all.