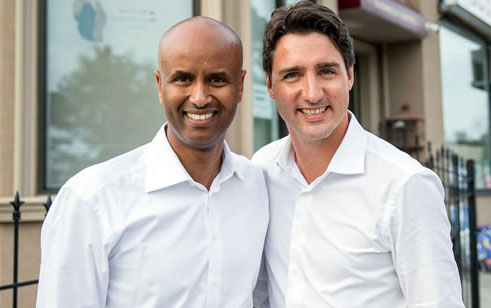 ATM would like to offer our congratulations to Ahmed Hussen, the Somalia-born refugee who arrived in Canada aged just 16, who has just been appointed Canada’s new Minister of Immigration, Refugees and Citizenship.

It’s an incredible achievement for a man who left Somalia’s capital, Mogadishu, in 1993 and worked himself up through the ranks. According to reports, his first job in Canada was a petrol pump attendant, where he earned money to pay for his university degree.

Legend has it that Hussen furthered his career by accident. When walking around the streets one day, he saw a flyer for a public barbecue hosted by a provincial politician, George Smitherman, who was so impressed by his guest that he recommended him for a job with the then-opposition Ontario Liberal Party. The rest, as they say, is history.

Hussen is living ‘The Canadian Dream’. Who else is better to serve as an overseer of immigration policy than a man who arrived as an immigrant-refugee and took all of the opportunities his new country offered him and ran with them?

Now aged just 40, he is in a much-respected and powerful position. Announcing the post, the Canadian Immigration Newsletter said: ‘Immigration policy touches Canadians and non-Canadians alike, and the minister leading the department is often seen as a reflection of the government’s mood and objectives. If that is the case, then this appointment may be viewed in a positive light.’

“I’m extremely proud of our country’s history as a place of asylum, a place that opens its doors and hearts to new immigrants and refugees, and I am especially proud today to be the minister in charge of that file,” Hussen told reporters when his appointment was announced. “All MPs and cabinet ministers enter public life informed by their experiences.”

Now self-identifying as “Canadian first,” Hussen has never forgotten his roots. In the past, he has served as National President of the Canadian Somali Congress (CSC). Under his leadership, the CSC partnered with the Canadian International Peace Project and Canadian Jewish Congress to establish the Canadian Somali-Jewish Mentorship Project. It was the first national mentoring and development project between a sizable Muslim community and the Jewish community. He was also a sitting member on the federal government’s Cross-Cultural Roundtable on Security.

Hussen’s achievements are inspiring, and embody what it means to be a refugee with a passion for justice and positive interfaith and international relations.

We wish Hussen the very best of success in his new role.