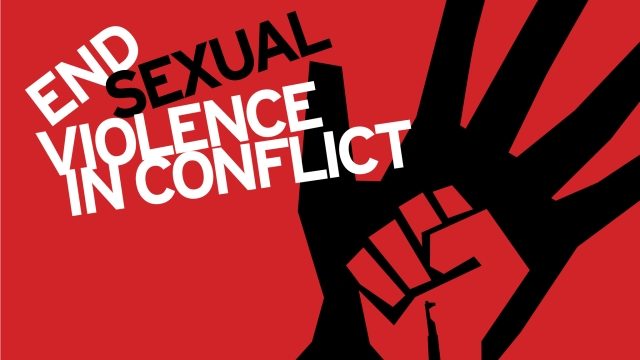 Sexual violence in Somalia is still widespread. Decades of conflict resulting in state collapse and reoccurring humanitarian crisis has forced hundreds of thousands of people to leave their homes and into camps.

Conflict-Related Sexual Violence against women and girls in Somalia is a crime that is massively underreported. In 2013, the UN’s Special Representative of the Secretary General on Conflict-Related Sexual Violence Zainab Bangura had called on the Somali government and officials to protect and improve the security of Internally Displaced People living in camps in and around Mogadishu. Bangura called for the need to build an effective, stronger, and more transparent justice system which allows perpetrators of sexual violence to be prosecuted.

Bangura argued how difficult it is to identify perpetrators as those who live in the camps are civilians, armed militias and government forces. The culture of silence was further highlighted in a peculiar case whereby a woman who had claimed she was raped by soldiers whilst living in a camp in Mogadishu was arrested along with the journalist who had interviewed her. Many independent experts have argued the existence of ‘double victimisation’ in Somalia, first the rape or sexual abuse itself, secondly, the failure of officials to provide effective justice support.

In 2014, a report published by Human Rights Watch entitled ‘The Power These Men Have Over Us: Sexual Exploitation and Abuse by African Forces in Somalia”, brought to surface damning evidence of sexual violence and rape committed by the UN funded African Forces  against women and girls who lived in the camps. The report goes into detail that from 2007, the forces deployed to bring peace and stability have abused their positions of power “to prey on the city’s most vulnerable women and girls, soldiers committing acts of rape and other forms of sexual abuse as well as sexual exploitation” (Human Rights Watch 2014).

The report continues to highlight how humanitarian aid was withheld in order to coerce vulnerable women and girls into sexual activity. Moreover, women had also reported that they were assaulted when seeking medical support at the African Union bases. This sadly does not come as a surprise when the UN reported that 70% of gender-based violence that take place in IDP camps are carried out by men in uniform. This further highlights the low number of reported cases of sexual abuse as survivors are afraid to come forward and report these heinous crimes for fear of retribution and a culture of impunity.

In 2019, a 12-year old girl named Aisha Ileys Aden was gang raped and murdered in Galka’yo in the semi-autonomous region of Puntland. Aisha’s body was found the following day near her home. This brutal attack was filmed and shared on social media, causing widespread outrage and protest across the region. A post-mortem revealed that Aisha had been gang raped, genitals mutilated and death by strangulation. The initial police investigation lacked transparency and accountability as anger within the community grew as campaigners demanded justice for Aisha by requesting officials to apply the country’s first Sexual Offence law adopted in 2016 which criminalises all sexual crimes including gang rape, sexual exploitation, abuse and harassment, sexual offences involving indecent exposure of genital organs in public places and on the internet.

In Somaliland, the president in 2018 has ratified the Sexual Offence Bill which criminalises all sexual violence and gender-based violations against women. This was welcomed by many within Somaliland who have also been marred with cases of gang rape.

Also, in 2018, the Cabinet of the Federal Government of Somalia passed through the Sexual Offences Bill which criminalises a wide range of sexual offences. This bill was widely welcomed as the current Somali Penal Code 1962 was a framework based on Italian colonial-era laws which were outdated and incomplete. To date, the Sexual Offences Bill has not been enacted as it has received objections from members of the religious community. The decision to halt the Bill has clearly shown that violence against women and girls in the country is not of priority or concern.

This blockade leaves a frightening reality that sexual violence is not only pervasive but gives the culture of impunity a platform for perpetrators to continue harm without legal repercussions. It is counterproductive to condemn sexual violence yet lack the legislative power to enact the Sexual Offences Bill which will give concrete protection to women and girls.

How many more of our women and girls must endure such heinous crimes committed against them before our elected leaders prioritise that living in a safe environment free from all forms of harm is a basic universal human right?