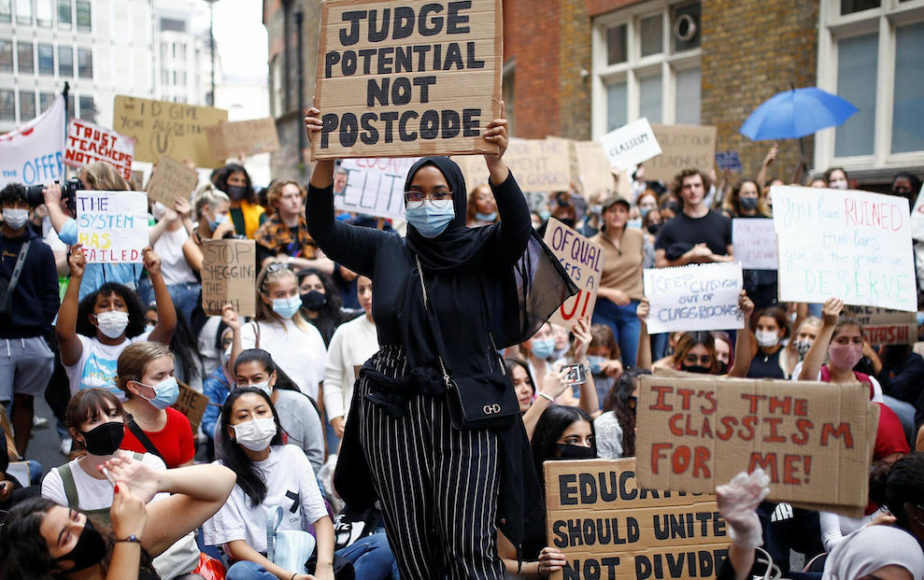 On Thursday 13th August, millions of young people up and down the country received their A-Level classifications. The grades allocated were not based on any “real” examinations but rather a mix-up on mock exam results, predicted grades and an Ofqual algorithm that got it shockingly wrong. Almost 40% of A level students were downgraded significantly, whereas 0.06% were raised by two or more grades. Ofqual’s own figures showed that pupils attending Independent schools received double the improvements in A* and A grades compared to those attending state comprehensive schools. However, on Monday 17th August the education secretary Gavin Williamson announced that Ofqual is ditching its algorithm for standardising A-level and GCSE results in England. Although this was a seen as a relief for many of our young people it was still a major setback and carried uncertainty and distrust.

Every summer, we’ve been on hand to support our young people (the majority of which are from Black-African backgrounds) with their A-Level results. We congratulate them where things have gone well and we’re there for them when they need a supporting guide to re- route their plans. Each year is a mixed bag of results for us; however, this year’s results shocked our team at ATM and our young service users to the core.

Twelve of our young people this year are awaiting A-Level results, ten of them were predicted As and Bs but were excessively downgraded to C or D grades. In one case, a promising student expecting an AAB was downgraded to DEE. Our BTEC students are still awaiting their results and remain anxious as to what their future will hold. The only positives during this absurd verdict was from a young man predicted AAA who was awarded a BCC and managed to retain his place. However, despite the adjustment made on 18th August he has missed out on a lucrative £4,000 scholarship from the Mayor’s Office to support his first year at university. He was set to be the first one in his single-parent household to go to university and study computer science – he got his place but has missed out on vital additional support.

Our young people have been failed. They have been put through a mathematic procedure to determine their potential on the basis of the school’s previous performance and the status of their school. They hail from some of the most disadvantaged neighbourhoods in London and education is often harnessed by our young people as a means for social mobility. The pandemic has exacerbated existing inequalities with reports that private schools exceeded their predicted grades outcomes whereas state schools suffered the most. It’s clear from our conversations that some of our young people performed poorly in their mock examinations in January – which could have contributed to their poor grades. In recent news of the U-turn made by the government, our young people felt relieved and annoyed. Some felt that they hadn’t made the best impressions on teachers who were given the sole responsibility to offer a predicted grade. Many of our young people live in overcrowded accommodation and face tech poverty insofar as their access to technology and the supporting wi-fi to take part in online classes. Intense revision was therefore not an option and the rising levels of mental health and domestic violence meant that the emotional and physical resilience to meet academic expectations went out of the window. We launched our mental health therapy fund to counter this. In our experience, every summer we have consistently witnessed a sharp turnaround by March or the real summer exams for our young people. their predicted grades are often met for the most part or exceeded in some ways. We have observed accountability where students didn’t meet their own expectations and self-leadership as they planned alternatives for their future in situations where they performed poorly.

The pandemic has removed any autonomy students had to determine their future. Their grades were predicted by a skewered algorithm that vehemently targeted the poorest kids from across the country then dismissed because of the major backlash faced by the education secretary and the government. There has been a lack of adequate and timely information regarding options for students to re-take examinations or appeal. The response from universities across the countries to students attempt to desperately engage with clearing has been appalling but a few who have taken a compassionate approach to the exceptional circumstances posed by the pandemic. One of our service users attends a school that offers Pre-U courses. These are slightly advanced courses intended to prepare students for higher education. Her predicted AAB (or AA M3 as some may know it) was downgraded to a BBB. She has taken the decision to re-take her exams but her school have refused to let her retake the years and she also cannot find a single state school that can offer the A-Level delivered at pre-U level. ATM is supporting students with exceptional circumstances with advice and support but the grey area is vast and we are seeing young people fall through the gaps.

Nonetheless, the decision made by the government to replace the systems approach to determine students’ grades with the algorithm to then make a U-turn approach with teachers predicted grades was a relief and a jubilant moment for some of our young people. In one case, a student who was significantly downgraded to DEE can now find some comfort knowing that her predicted grades are AAB and move forward with applying to her first choice again. However, it has still caused major uncertainty for others that feel like predicted grades may not be a true reflection of their capabilities due to material deprivation that they face in their households, not having the best relationship with teachers, also not performing their best in mocks but do better in final exams which we have seen in many of our young people that have a major turnaround in march and final exams compared to previous mock exams. University admissions have also played a big factor is causing distress for students. For example, one of our young people applied to study at a prominent London university but was considered unsuccessful because of the algorithm prior to the U-turn, she then applied again through clearing and was accepted and sent a confirmation letter congratulating her on her placement. As expected, she was ecstatic and relieved that she could finally put her mind to rest.

We are continuing to monitor changes around results and will update this blog accordingly with insights and contributions from our young people. For now, we have fended off a huge injustice which could have deepened educational inequality in higher education. We very almost wrote off an entire generation of young people, not because they couldn’t compete academically, but due to state-sanctioned inequality and bias by way of a global pandemic.