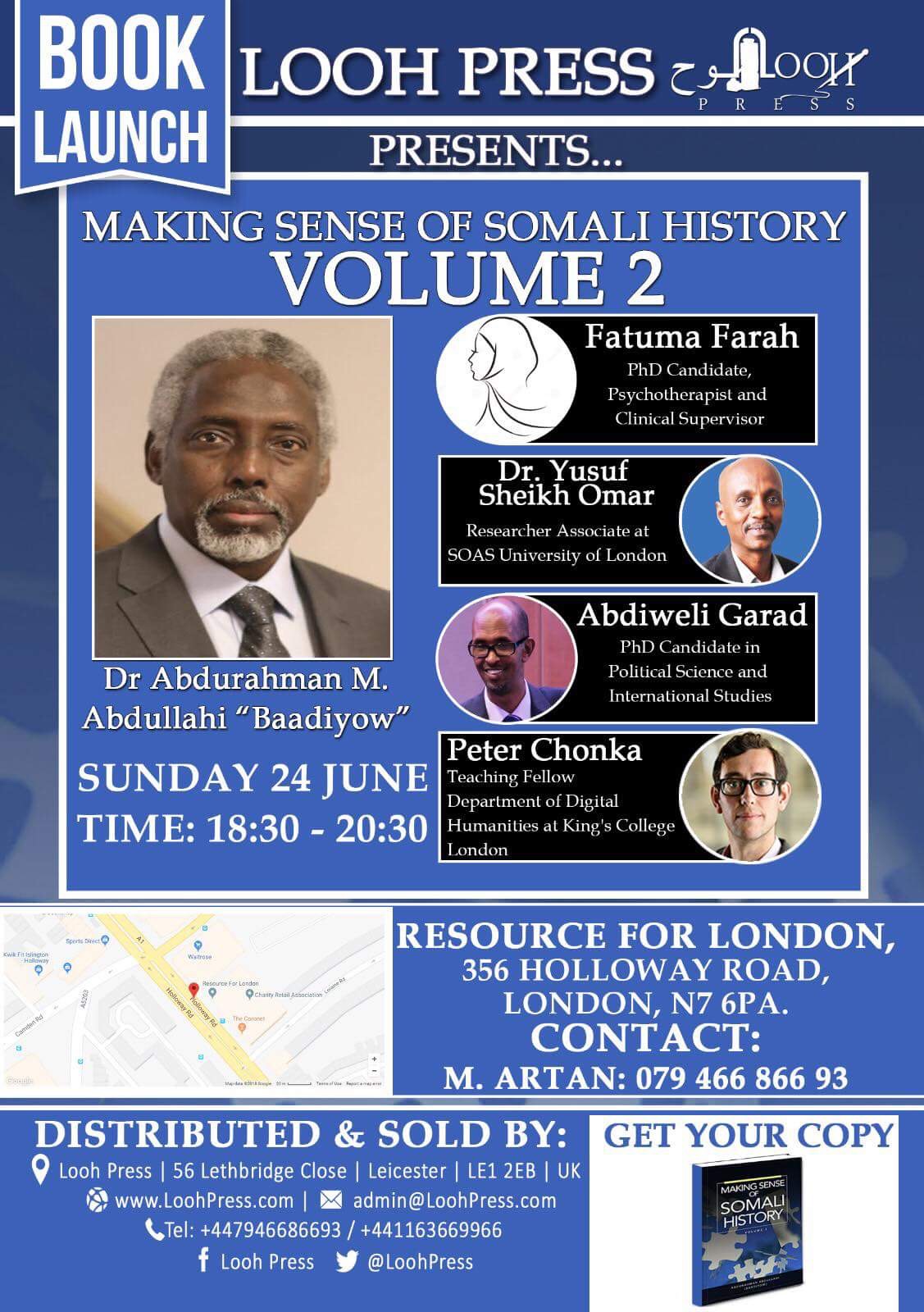 Looh Press is proud to launch ‘Making Sense of Somali History; Volume II’ by Dr. Abdurahman M. Abdullahi “Baadiyow”. This volume of a two-volume narrative, Dr. Abdurahman. The collapse of the postcolonial Somali state in 1991 and the consequent outbreak of civil war drastically transformed the socio-political landscape in Somalia. Somalis reverted to the pre-colonial state of affairs and sought refuge in their clan attachments. Local authorities were contested by the warlords, traditional elders, Islamist organizations and modern civil society. Indeed, it was non-state actors that played incredible role in sustaining the livelihood of the stateless people. During this period, the role of women in socio-political affairs grew exponentially and Somalis’ national identity became reconfigured profoundly.

There is also a chance to purchase his three other titles; Making Sense of Somali History Volume I, Recovering The Somali State; The Role of Islam, Islamism, and Transitional Justice, The Islamic Movement in Somalia: A Study of the Islam Movement, 1950-2000.

Dr. Abdurahman M. Abdullahi (Baadiyow) was Dr. Abdurahman M. Abdullahi (Baadiyow) was born in 1954 in the district of Elder (300 km north of Mogadishu) in the central region of Somalia. He combines a rare quality of being military officer (1971-1986), electronic engineer, Islamic scholar, and civil society/political activist. He Joined the Somali National Army in 1971 and was sent to the former Soviet Union as a Cadet Officer to specialize in Missile Engineering from the Higher Air Defense Academy in Odessa (currently in Ukraine). After returning home during the Somali-Ethiopian war in 1977, he became an army officer and continued in the service until 1986. Besides military service, he became a lecturer in the faculty of engineering of Somali National University.

Dr. Abdullahi migrated to Canada and joined the Institute of the Islamic Studies, McGill University in Montreal receiving MA and PhD in Modern Islamic History. He returned to Somalia in 1992 after finishing first postgraduate degree at the peak of the civil war and became one of the pioneers in establishing Somali civil society organisations. In 1994, he was elected as the Chairman of the Somali Reconciliation Council, an NGO known for its considerable efforts in the reconciliation programs ranging from community, social and political levels. He was also elected as a chairman for one of the first networks of Somali Civil Society known as “Peace and Human Rights Network” which had succeeded to bring together most of the modern civil society organizations at the national level. He is one of the founders of Mogadishu University, the first non-state University established during the civil war in 1996 and became its Chairman of Board of Trustees. Besides political career and civil society activism, Dr. Abdurahman is also a scholar who contributed in the Somali studies. He formed a new historical perspective known as “Comprehensive Historical Perspective”. This perspective criticizes other three major perspectives on the study of Somali history such as Anthropological, Marxist and revisionist. He participated in many academic conferences and published a number of academic books, papers, book chapters and numerous articles in Arabic, Somali and in English.

Fatuma Farah is a UK trained and qualified psychotherapist and clinical supervisor. Fatuma wrote her masters dissertation on “Psychotherapy and the Somali community”. She worked for the National Health Service (NHS) in the UK and with different United Nations bodies in Somalia and Mozambique. Fatuma is in her final year of PhD research on the practice that is known as Female Genital Mutilation (FGM) at the University of East London. Fatuma works part-time as a senior clinician at WPF Therapy and at Nafsiyat Intercultural Therapy Centre.

Yusuf Sheikh Omar holds a PhD of Social Science, La Trobe University, Australia. He is a Researcher Associate at SOAS University of London. He is also a peace practitioner. His research has focused on peace building in Somalia, Somali diaspora knowledge and skills transfer to Somalia, mental health and emotional wellbeing, identity, belonging, social transformation and cultural adaptation of young Africans and Muslims in Western countries. Yusuf has published widely in international academic journals and leading Australian newspapers such as The Age and The Sydney Morning Herald. In 2012 Yusuf was appointed as a member of the African Ministerial Consultative Committee for the Australian Federal Government (2012–2013). He was also appointed as a Global Advisor to Global Reconciliation in Australia in 2015-current. He is a member of the Advisory Board of Somali Studies published by the Institute of Somali Studies, Mogadishu University. He is a board member of Anti-Tribalism Movement and Global Somali Diaspora. He was also a Board member of several organizations and governmental departments including Educational Advisory Committee of Victorian Police and Department of Justice of Australia.

Abdiweli Garad is aPhD Candidate in Political Science and International Studies (POLSIS) at University of Birmingham, UK, aiming to complete this undertaking at the end of next year. Before the current PhD research, he studied undergraduate in Computer Systems at the University of Northamptonandpostgraduate in International Security and Global Governance at Birkbeck College, University of London. Between Birkbeck and Birmingham Universities, he spent two years as a Research Officer, Rapporteur and a member of a technical team for the New Deal’s High-Level Task Force. Plus, one and a half years as the National Security Advisor (NSA), serving to lead coordination roles for the security sector, work, in close collaboration, with the relevant Ministries on behalf of the Prime Minister. Before the civilian life, Mr Garad served as an army officer for the Somali National Army for eleven years – entered military service after completing military academyas a 2nd Lieutenant Officer and promoted, in reverse chronological order, within the standard procedure for SNA up to the Lieutenant Colonel.

Peter Chonka’s PhD research focused on transnational Somali-language media networks and their impact on political identity and state reconstruction in the Horn of Africa. His recent publications have explored the production, dissemination and utilisation of particular types of digital texts in this media ecology, and online/offline contestation between state security forces and militant opposition groups. He has previously been teaching in the fields of African Politics and Development Studies at SOAS and Birkbeck (University of London). Prior to his doctoral research he worked for the International Committee of the Red Cross, primarily in places of detention across Somalia.