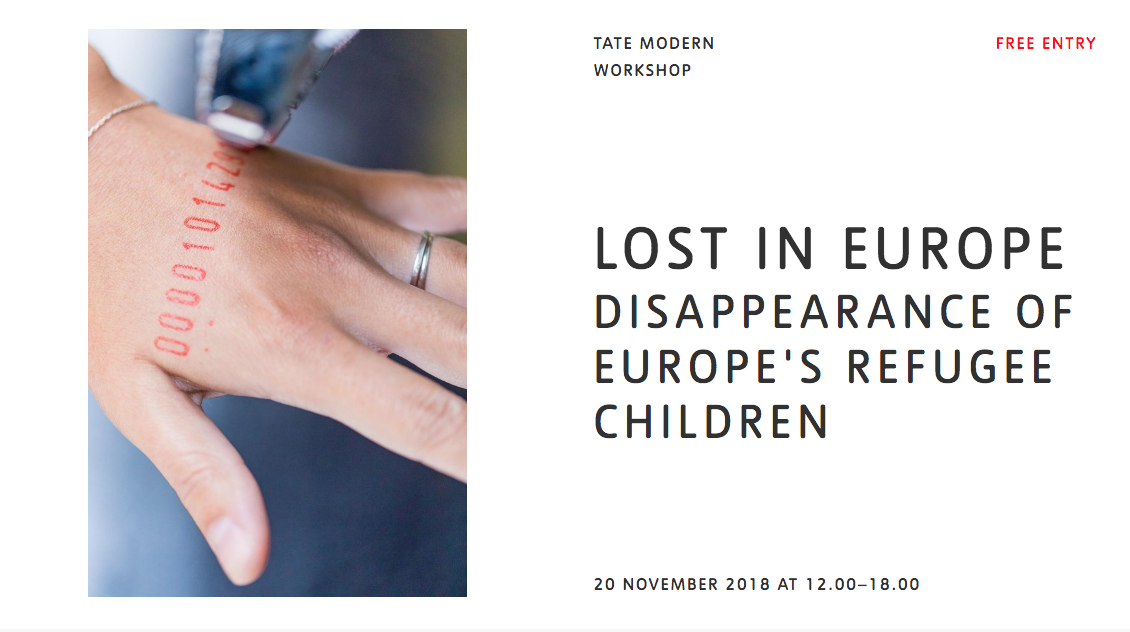 Drop-in, investigate and uncover stories of child refugees ‘lost’ after arriving in Europe

The plight of unaccompanied child refugees is one of the most pressing issues of our time. Europol, the EU’s police intelligence unit, estimates that around 10,000 unaccompanied children have gone missing in Europe over the past two years. It is feared that some have fallen into the hands of drug gangs, human traffickers, or were sold into the sex industry. Others may have travelled to family or friends in Europe without reporting it. They have all but disappeared.

Drawing on the Hyundai Commission: Tania Bruguera – 10,145,866, a community-driven response to the global migration crisis, Lost in Europe will host a bootcamp at Tate Exchange. Open to all, we invite you to unpick the data available on Europe’s missing migrant children. This will take the form of an hour-long interactive data bootcamp followed by a panel discussion to explore the broader themes. The panel discussion will share perspectives from the Lost in Europe team alongside Debbie Beadle, Director of Programmes at Every Child Protected Against Trafficking UK.

About Lost in Europe
The goal of Lost in Europe is to recover the stories of these missing children. It comprises a team of investigative journalists from the Netherlands, Belgium, Italy and the UK, who are collaborating to find out what has happened to disappeared children in Europe.

Supported by news organisations, such as VPRO, De Standaard, BBC Radio 4 News, and Il Fatto Quotidiano this investigative journalism project will shine a light on wrongdoing and tell the stories of disappeared child refugees in the EU. This cross-border project is backed up by the Investigative Journalism for the EU Fund. Over the past months, Lost in Europe have requested data on missing child refugees from all EU countries. In October, the group organised a data bootcamp in Amsterdam (together with Lighthouse Reports and several experts) to see what can be learnt when all the data is brought together.

Please join them and bring people along. The event is free to attend and you can find out more information here:
https://www.tate.org.uk/whats-on/tate-modern/tate-exchange/workshop/lost-europe