“Laatiin la Diin!” – “The Latin Script is Sacrilegious!” Language and Politics: The Story of the Somali Script 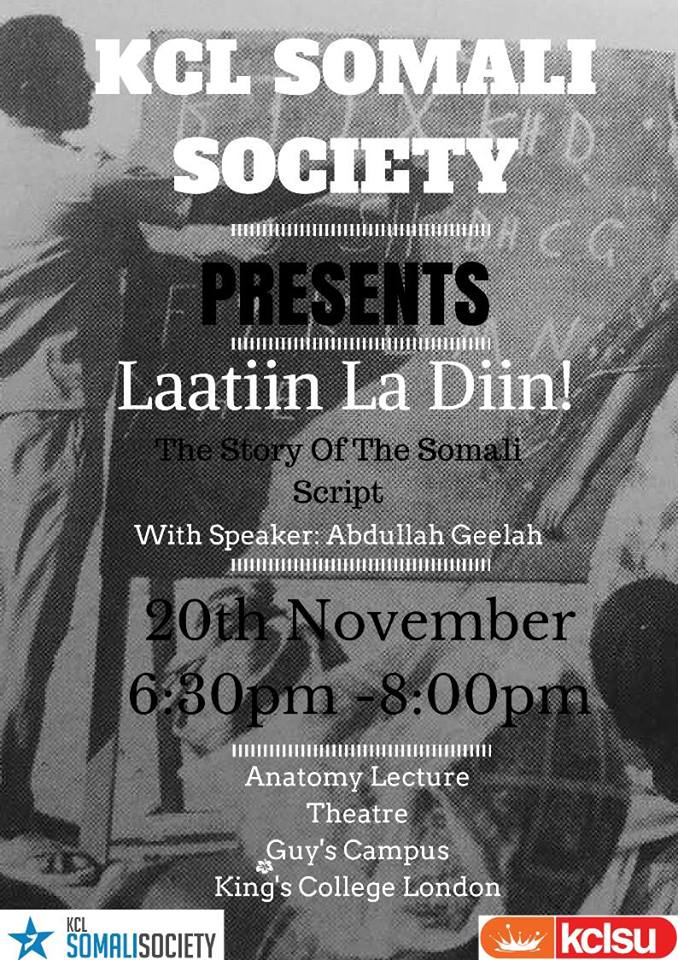 King’s College London Somali Society are excited to be hosting this special event where we will analyse the rationale behind the selection of the Latin script as the official orthography for the Somali language.

Before the adoption of a script, Somali developed to be a well-established oral language with diverse dialects, varieties, and registers that were used in different domains. Nevertheless until 1972, the Somali language, which the Somalis considered as sacrosanct to their identity and culture, remained without an official script despite the many attempts to establish a writing system for the language. This talk outlines the history of the Somali script and discusses the socio-political dimensions surrounding the debate and selection of an official national orthography.

Abdullah Geelah is a graduate in a BA (Hons) degree in Linguistics from the University of Sheffield, England. His undergraduate research project, on which this talk is based on, focussed on the political factors surrounding the adoption of the Latin orthography for the Somali language. Abdullah is an elected member of the National Union of Students’ (NUS) Black Students’ Campaign and a student activist entering the final twilight year of his student activism chapter. He’s currently pursuing a postgraduate master’s degree in Law at the University of Sheffield. Alongside his love for all things Somali, his other special research interests include: Xeer (Somali customary law), Shariah, critical race theory and postcolonial legal theory.