Breaking the Silence: A Discussion on Somali Women’s Health 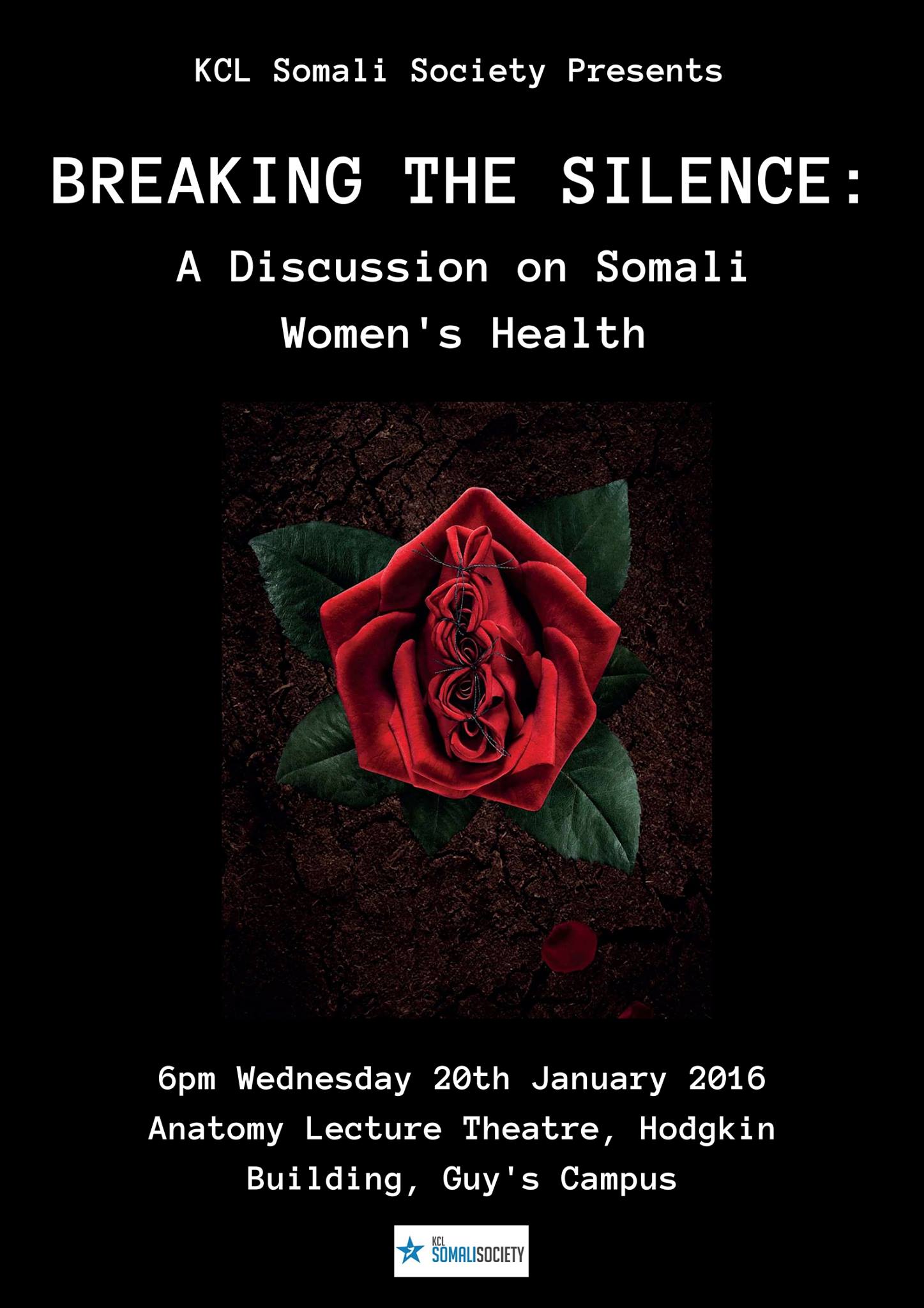 **UPDATE**
Register on eventbrite to reserve your place! https://www.eventbrite.co.uk/e/breaking-the-silence-a-discussion-on-somali-womens-health-tickets-20475107598

“Women are not dying of diseases we can’t treat. They are dying because societies have yet to make the decision that their lives are worth saving.” Mahmoud Fathalla, Former President of FIGO

KCL Somali Society is pleased to present “Breaking the Silence: A Discussion on Somali Women’s Health”.

The health of Somali women is greatly influenced by poverty, gender discrimination and violence. In this event, we hope to explore the silent health issues faced by Somali women both in the UK and Somalia – including female genital mutilation (FGM), maternal health, and mental health. We aim to raise awareness of these issues, along with discussing methods of prevention, solutions, and ways in which we can all get involved. There will also be a chance for the audience to participate in a question and answer session at the end.

We have a line up of amazing speakers!

Ms Leyla Hussein is a psychotherapist and a multi-award winning anti-FGM campaigner in the UK. She co-founded Daughters of Eve, a non-profit organisation which aims to protect girls and young women at risk of FGM. She has worked closely with numerous organisations, including the Young African and Friends Group, Somali Youth Forum, Hawa’s Haven, Amnesty International, and the Metropolitan Police on Project Azure. Her Channel 4 documentary ‘The Cruel Cut’ on FGM in the UK was nominated for several awards including a BAFTA in 2014. She also blogs for the Huffington Post, Cosmopolitan magazine and The Guardian. Ms Hussein will speak about mental health and her work in the prevention of FGM.

Mr Kamal Abdukadir is the National Programme Associate for the United Nations Population Fund (UNFPA) in Somalia. He is currently working on The Campaign for Accelerated Reduction of Maternal Mortality in Africa (CARMMA) in Puntland, Somalia. CARMMA is an initiative by the African Union Commission to curb the high maternal mortality rates across Africa and promote sexual and reproductive health and rights. Mr Abdukadir will be speaking about maternal health in Somalia and his work in CARMMA.

Mrs Hoda Ali is a FGM survivor and activist. She has played a key role in the anti-FGM campaign in the UK, speaking at numerous educational events in order to raise awareness and campaign for the prevention of FGM. She has also taken part in the Channel 4 documentary ‘The Cruel Cut’. She is currently working as a Sexual Health nurse in Ealing Hospital. Mrs Ali will be sharing her personal story, as well as looking at ways in which we can end the practice.

Ms Joy Clarke is a Lead FGM Specialist Midwife and runs the FGM clinic at Whittington Hospital. She has presented on FGM at conferences both nationally and internationally. She is also involved in training and raising awareness of FGM to frontline professionals and practising communities in London. Ms Joy Clarke is a member of the NHS London FGM steering Committee, Trust for London Advisory Group, as well as the FGM Advisory Group at the Home Office FGM Unit. She will be explaining the background of FGM, the reasons why it is practiced, as well as telling us about her work in the prevention and treatment of affected women.

We hope to see you there! It promises to be an enlightening event!